A woman you can count on.

I like a woman you can count on.  Somebody whose opionions can be trusted.  I know many women like this, lucky for me.  I know if I need information about medicine, I will go to keepingtrac.wordpress.com.  If I have a question about fashion, I would go to Beth FS. If I need to figure out how to use kitchen appliances, I call my mom.

But, when it comes to a sure fire, crowd pleasing recipe, I know I can go to Ree Drummond, “The Pioneer Woman”. *

Seriously, Beth FS and I have collectively made over a dozen of her recipes and I think I speak for both of us when I say she has an over 90% satisfaction rate.  Beth FS and I are also always trying to make good food choices, by eating healthy, whole foods.  So, it has to be said that while the Pioneer Woman uses mostly “real food” ingredients, she also isn’t shy about butter, sugar,  and cheese, so sometimes her recipes have to be an indulgence, or in some cases, you can just slightly modify them.

Pioneer Woman makes dinners, side dishes, and desserts.  And for me, somebody who just delved into the world of cooking in the last few years, I find her blog so helpful because she puts pictures in as it goes step by step.  I know that some people don’t like this, and for you people, she has the recipe in a printable style at the end of the blog entry.

It had been a while since I made something from her blog when my bff Liza sent me an email that said this,

“I am here with a public service
announcement.

Run, do not walk, to the store and buy the ingredients for
these potatoes.  Make them tonight.  I mean, pronto.  They will change your
life.  Seriously.

So, naturally, she was my bff and she was talking about The Pioneer Woman, I knew this was a win-win situation.  So, I went to the store to get the potatoes, because I had everything else at home.

I cut back on the amount of oil and salt, but basically made the recipe exactly like she did.  And oh. my. gah.  These were amazing.  It was like a combination of baked and fried potatoes without all of the added butter and grease.  I loved the crispy aspect of the skin because I eat potato skin.

And after I made them, my brother, who loves food as much as me had the same thought I did.  These would be perfect at a party as an appetizer with a little cheddar, bacon, and sour cream on them.  Mmmmm.

I have made these for dinner four times in the last two weeks.  They are that delicious. 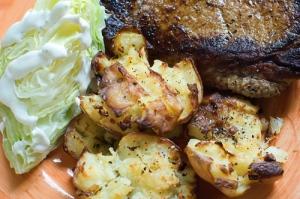 Try them!! You can trust me.  I am one of those women you can trust about food.  I promise.

Some other of my favorite Pioneer Woman Recipes:

Everything Cookies.  These are extremely expensive to make, but once you take a look at the ingredients, you feel a little healthy eating them.  Also, you have to have a good mixer.  I only have a hand held one and it was smoking.  Literally. 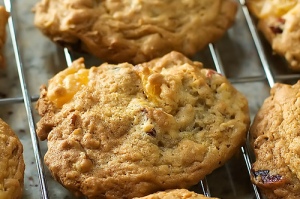 Chicken Spaghetti  THis is one of her classics, I believe.  It’s one of the few recipes in her cookbook.  My mom made it for a shower I hosted once (because she’s awesome like that), and it was the hit of the pastas served. 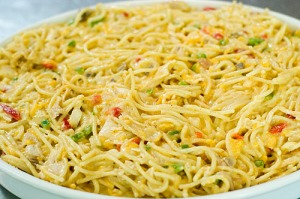 Pioneer Woman Photo (note to self: learn how to do photo credits)

This was the first non-jar spaghetti I’d ever made.  It was also the first time I had made meatballs from a recipe different than my mothers.  It was a success.  It was so successful I made it for my inlaws, and my MIL is an excellent cook.  I think I liked the meatballs so much because they were half pork and half beef.  If I made it again I might do half pork and half turkey.  Or maybe not.  Why mess with delicious?  Needless to say, it’s tasty and easy, and it makes your kitchen smell pretty awesome. 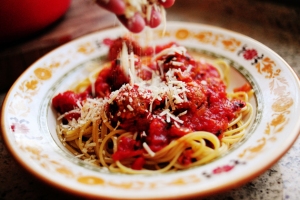 And lastly, I made this cake:  The Fourth of July Cake

It was difficult to make, expensive, and probably stops your heart with the amount of butter in it. But it was also DELICIOUS.  It was SOOO rich.  But I loved it.  And I had a bunch of kids at my 4th of July party, so I let them put the berries on top.  If I ever made this again, I would definitely halve the recipe because it was way too much cake, even for a lot of people. It was also only the second time I had ever made a cake from scratch.  The first time was in the 7th grade, and it was terrible, so I don’t really think that counts. 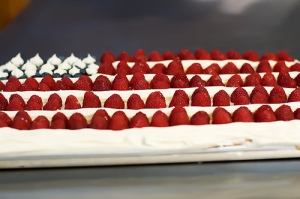 Also, Pioneer Woman has a new tv show on the Food Network.  I can’t wait to see it.  I think it starts today.  I must go set my DVR!!

So, those are my favorites.  Do you have any favorite go-to recipes or recipe blogs?  Please share!

*I also go to Beth FS for such recipes, and for many other pieces of advice, which is basically how this blog was born.

Beth FS Post Add:  My thoughts on the Pioneer Woman mirror those of Beth WA.  She can do no wrong when it comes to delicious and doable recipes. I made those potatoes as soon as Beth WA shared the recipe with me.  Neither she nor her BFF Liza have exaggerated.  Seriously amazing potatoes.  I just wanted to add to the PW love, and share a few of my favorite of her recipes:

Edna Mae’s Sour Cream Pancakes – We do breakfast for dinner about once a week at my house.  And it is always these pancakes, usually with a side of turkey bacon.  I use reduced fat sour cream, and I add a generous helping of frozen blueberries (thawed) to the batter before cooking.  I also just use Pam instead of butter on the skillet. (Note: the link is to a non-PW blog because I could not find the recipe on her website.  But it’s in the cookbook!)

Perfect Pot Roast – Mr. FS’s very favorite meal in the whole wide world is pot roast.  We’ve been together for over seventeen years, married for almost eleven.  Until about I bought the PW cookbook, I didn’t know how to make pot roast.  There was a looooooong time between the time The Cooker (which served his very favorite “Yankee Pot Roast”) closed and the time that I learned to make an acceptable substitute.  Thankfully, he waited it out.  And I think he’s glad he did, because this pot roast is to die for.  I daresay even better than The Cooker’s. (Sometimes I don’t have fresh thyme or rosemary. I just used dried)

Caramelized Onion & Proscuitto Pizza – This is not a less expensive than takeout/make it yourself pizza.  Nor is it something you can just throw together at the last minute (unless you have already made the crust and caramelized your onions).  But it is the best pizza I have ever tasted.  It’s like fancy pizza they might serve at a hip restaruant.  Except you can eat it on your couch, without makeup on.

4 Responses to A woman you can count on.