Food Highlights of the Week

Hello, it’s Beth WA here on Sunday night procrastinating with my school work.  I should be grading and working on lesson plans, but all I really want to do is a post about some delicious food I’ve experienced this week.

Before I share the standout food of the week, I must tell you that for almost my whole life I’ve had an unhealthy relationship with food.  I’ve always battled with my weight, and it’s a daily struggle for me.  Over the last few years I’ve been working to change that.  I’ve barraged myself with information about the *right* way to eat.  I’ve read so much about organic, vegetarian, vegan, local, CSA’s, real food, and intuitive eating.  It’s a subject that I love, and I feel strongly about.   While this information continues to shape my diet and my philosophy of eating, I find that for me, Weight Watchers offers excellent tools for me to strive toward my goal of losing weight while doing as Michael Pollan says, “Eat Food.  Mostly Plants. Not too much.”  I try to make sure that most of my diet consists of things that grow out of the ground.  Now, it has to be said, that I am definitely a work in progress.  I will still indulge in foods that aren’t grown out of the ground, but that is just something I strive for.  Especially since I was recently diagnosed with hypertension.  This has made me seriously think twice about everything that I put in my mouth.  But with the aforementioned unhealthy relationship with food, that is not always the easiest thing for me to do.  But I will continue to strive for it.  One Weight Watcher point at a time…

So, here are some of the food highlights of the week.  Some are good for you, and some were just plain GOOD.

The meatballs in this recipe were turkey meatballs from Janetha at Meals and Moves, http://mealsandmovesblog.com/2011/08/30/meatballs-two-ways/.  They were really flavorful with sundried tomatoes, and fresh basil, but kind of dry.  I thought that next time I might add a different meat, or perhaps use the 93/7 turkey instead of the 99/1.

We were expecting guests (my brother and his wife), so I made one of these: 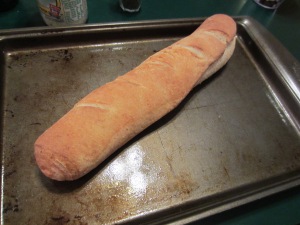 It’s a Pillsbury Crusty Loaf sold in one of those tubes by the butter.  I could eat the whole loaf, which is why I usually only make them when we are expecting guests.

I also made some amazing oatmeal this week that would make Kath Younger at http://katheats.com/ proud.  She introduced me to adding new ingredients to oatmeal to make it more filling, and more tasty.  Both of these bowls have a lot of Weight Watchers Points Plus, but they both kept me full for over four hours, and the second one was my breakfast AND lunch since I was going to a late afternoon party.

I also ate strawberries and mango on the side.  I am a mango maniac, and never think to buy them at the grocery store.  Until now.

I went to my bff Liza’s daughter’s 2nd birthday party.  They had this BEAUTIFUL cake, that immediately upon seeing it I thought that it probably wouldn’t taste that great because it was so pretty.

I have never been so wrong in my whole life.  This cake was To. Die. For.  It was a white cake, and it was so moist and delicious.  Even the red icing/fondant tasted delicious.

Check out this amazing cake: 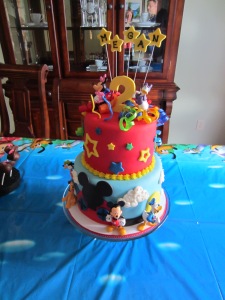 made by: Cake Chic, Monroe, OH

And another treat…Liza made cake pops.  They are my absolute favorite.  I had my first one at a bake sale at school and these were only my 2nd time having them.  They did not disappoint.  Liza put little white chocolate ears on them so they looked like Minnie Mouse.  She’s a good mom.  (If you are unfamiliar with cake pops, they area baked cake and icing mixed together and put in the form of a ball, then dipped in chocolate, white or milk.)

Yes, she cut the styrofoam to look like Mickey Mouse.

And lastly, I made my first frittata.  I kept saying frittata over and over.  I don’t think my husband enjoyed it as much as I did.  I had tons of vegetables to use, and I had watched the video Kath at http://katheats.com/ made to show how to make them. (I am a bit obsessed with Kath..more on that in a later post.)  It was awesome because I used 4 eggs, a few pieces of turkey sausage, a handful of frozen hashbrowns and all of the rest vegetables.  (Mushroom, Onion, Pepper, Spinach, Mom’s Garden Tomatoes). 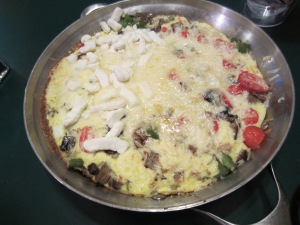 I topped it with goat cheese for me, and parmesan cheese for me. My husband doesn’t like goat cheese, yet, I stay married to him.  He is lucky. I could only eat a little over 1/4 of it, as it was SO filling.  The Weight Watchers Points Plus value was very low since it was primarily vegetables.

Well, I hope everybody had a great Sunday, and took time to reflect on the fact that it is September 11th, ten years later.  I spent the morning flipping between my boyfriend Brian Williams on NBC and my bff Diane Sawyer on ABC.  There were lots of tissues.  (See previous post about saluting.)

2 Responses to Food Highlights of the Week