Last night my niece – the love of my life – stayed over night with me. She is seven. And she is awesome.
We got up this morning, and I made her a smoothie. It was the first thing she asked for when we got up. I think it’s one of the reasons she likes to stay here. She hates milk, but ate a smoothie that was 1 cup of milk, and 1/3 cup plain greek yogurt, and frozen mangoes, with vanilla weight watchers protein smoothie mix and a little cinnamon and vanilla extract. She drank all of it.

Now, we are just having a leisurely day. I have tons to do, but I am embracing all of these moments with her since they will be moving out of state *to Texas* in a few months.

Here she is watching disney channel…she didn’t know I was taking this picture. 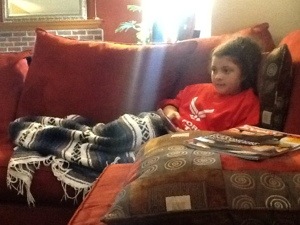 I am hoping to make it to the grocery store tonight.
But, first, I’ll probably have to change out of these pajama pants. (unlike a lot of people in my town, right Beth FS?)

Like Loading...
This entry was posted in Family and tagged leisurely, love, niece, pajama pants, smoothie. Bookmark the permalink.